A Day in Knitter’s Paradise

When you give Barbie a haircut with someone, you form a lifelong bond. Even when you fall out of touch for, oh, twenty-five years and then reconnect through a mutual friend and Facebook, the ties remain strong. And that bond is reinforced when you discover that you share a passion for knitting.

Theresa was one of the folks who inspired me to take up knitting, and of course, her abilities far surpass mine. In fact, she is a knitting rockstar. She also spins and makes her own dyes from organic sources like mushrooms and such, and she even embroiders (check out this guitar-pickin chickin she made for me!).

The first time I mentioned to another knitting pal that Theresa of “Techniques with Theresa” on Knitty.com was a childhood friend, I thought I was going to have to scrape her off the ceiling, she got so excited. Now I get a thrill out of impressing People Who Knit with, “Hey, guess who I know . . . ?”

You can imagine, then, my joy when Theresa, who followed her heart to Europe many years ago to marry herself a handsome Norwegian, moved back home a few weeks ago (bringing said handsome Norwegian) — not just to the U.S., but to Franklin, North Carolina, where she is now nestled in the heart of her extended family on some beautiful, hilly farmland in the Southern Appalachians (she and I grew up not even a mile apart in Rabun Gap, Georgia, about 20 minutes south of where she now lives).

Last week I drove up to the mountains for a few days to visit with my family and reconnect with Theresa in person. Our plan was to indulge our shared fiber fantasies — from raw material to finished product. We began our day with a visit to an alpaca farm.

Merritt Farm is ten acres surrounding a lovely 100-plus-year-old log cabin in Otto, North Carolina, situated just between Rabun Gap and Franklin. Liza McArthur, farmer-in-chief, left police work in Ft. Lauderdale, Florida, to pursue her dream there in 1996 with her kids. She spent the next several years restoring buildings and land in preparation for an alpaca herd.

Liza acquired her first alpacas in 2000. She breeds them and maintains her herd using environmentally sustainable methods (diatomaceous earth instead of toxic chemicals for pest control, for example), and her fiber is supple, soft, and strong. When Theresa and I visited, she had just received a supply of yarn back from a mill where she had sent off a batch of raw fiber. I bought two skeins of creamy, lustrous laceweight stuff, and Theresa bought some beautiful roving.

We sat on the porch of the cabin for awhile, listening to Liza’s story and running our fingers through her yarn. She could tell us the name of each animal from which each yarn came, just from the color and lustre of the stuff (mine came from a gal named Mawatta). Then we walked through her morning chores with her — feeding, weighing the cria (that’s what you call a baby alpaca), and just saying hello to everyone. Alpacas do spit, but only if provoked. Liza’s animals are gently handled from birth and therefore are very friendly. One even offered to style my ’do.

Liza also has a small flock of chickens and the beginnings of an orchard, plus like me, she nestles food gardens in every sunny spot she can find. She has several dogs who guard the female and gelded alpacas in shifts throughout the day and night, and a guard llama named Solomon protects her breeding sires.

Yes, you read right: a guard llama. I was fascinated to learn that llamas, it turns out, are very alert and have this fierce call that will sound an alarm if an intruder or threat comes around. They will even go after it kicking. Some guard llamas will draw their flock together and herd into safety, just like a herding dog. Who knew? 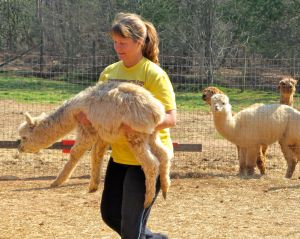 Theresa had visited with Liza before and had told her of her vision for her North Carolina farm home. Which may have been part of what she had in mind when she offered a couple of seven-year-old male Alpacas for Theresa to adopt! I squealed like a llama when Theresa provisionally accepted the offer, explaining that it would probably be wise for her to check with her family before bringing home two large mammals. After making plans to return to the farm in early May for Liza’s shearing days (fun!), off we went to Theresa’s house to check out her fencing and barn — both for the alpacas and the flock of chickens she’s planning on getting. I’m living vicariously through Theresa’s hoofstock acquisition, since City of Decatur ordinances prevent me from having my own.

Later we drove a little further north into downtown Franklin for lunch and a visit to the yarn shop there, where I got to witness a real rockstar moment. A woman ahead of us in the register line kept turning around and looking at Theresa — “I know I’ve seen you somewhere . . .” — and finally realized it was from her knitty.com column. Then the shop owner spoke to Theresa about teaching a few classes there. Hello, mushroom dyes and kitchener stitch! 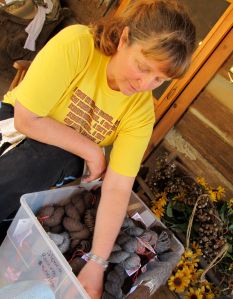 Determined to find an excuse to stay in touch with Liza, who is someone you just want to know, I talked with her about starting a yarn CSA. She thinks it would work, especially if she recruited a few other producers in the area (llama, angora goat, and wool, maybe) in a cooperative effort. Knitting readers, would you have an interest in participating in such a thing? Liza thinks she might be able to handle 20 subscribers. Let me know if you’re interested, and I’ll share details as we work on them.

Here is an example of one yarn CSA.

5 responses to “A Day in Knitter’s Paradise”